My tickets for the FA Cup Final arrived in the post yesterday. I am very excited indeed.  I have a feeling that my team will bring the trophy home to south London where it belongs.

It is that time of year when football fans are living on their nerves as their team battles to win promotion or stave of relegation.  Fortunes – in every sense of the word – can change in seconds: a goal, a penalty decision, a sending-off.  Who knows what it will be?  I don’t expect everyone to understand this but to paraphrase Maxine Peake in the long-running legal drama, Silk: ‘It’s not about the football, it’s all about the football.’

You could say that, ten years ago, UK was in a battle to stay in the big league of countries doing clinical research.  Now it is regularly in the Champions League and often carries off a trophy or two.   The National Institute for Health Research (NIHR) has been instrumental if not pivotal to this success story.

I am deeply proud of the fact that patients and the public have not just featured in the NIHR story but have become an integral part of the NIHR team up and down the country.  It will be good to see many of them at a conference on Wednesday to mark the ten-year milestone.  I am particularly looking forward to taking the stage with a few of them to talk about how patients have made a difference to NIHR and what more we can do together in the future.

My passion for clinical research – like football – is very much a heart thing.  In fact when people sit down to explain the science to me I sometimes have the same expression on my face as someone trying to understand the off-side rule in football for the first time.  Perhaps I shouldn’t admit to things like that.  Nor, sadly, that I have been known to punch the air with joy at a news story about the latest, greatest piece of research. Just as I might a goal.

The sense of union one feels as a football fan – standing with thousands of others like-minded supporters – is conveyed in the singing of course.  Sometimes ebullient, often funny, occasionally imbued with a rich vein of gallows humour.  One of those chants is where the seated crowd are implored to ‘Stand up if you love….’ [insert team name].  And so we do, with alarms aloft, bellowing for our lives.

This time next week, across NIHR and the NHS we will be imploring people to do the same in the name of clinical research for International Clinical Trials Day (ICTD).  As I like to say to people, the NIHR ‘OK to Ask’ campaign and ICTD is more than just another awareness event.  It’s a pop-up festival with a purpose.

To shout loudly and proudly to patients and families across the UK that there is NHS research happening on their doorstep from which they might benefit. To thank the millions who have participated in studies to find new treatments over the last decade.  To enable patients, researchers, clinicians and health professionals to come together as a team and show others what they have been doing together in the name of research. With exhibition stands, events, tweet chats and a whole lot more at hospitals and institutions around the country from 20 May until well into the early summer.

UK clinical research is the team to beat. 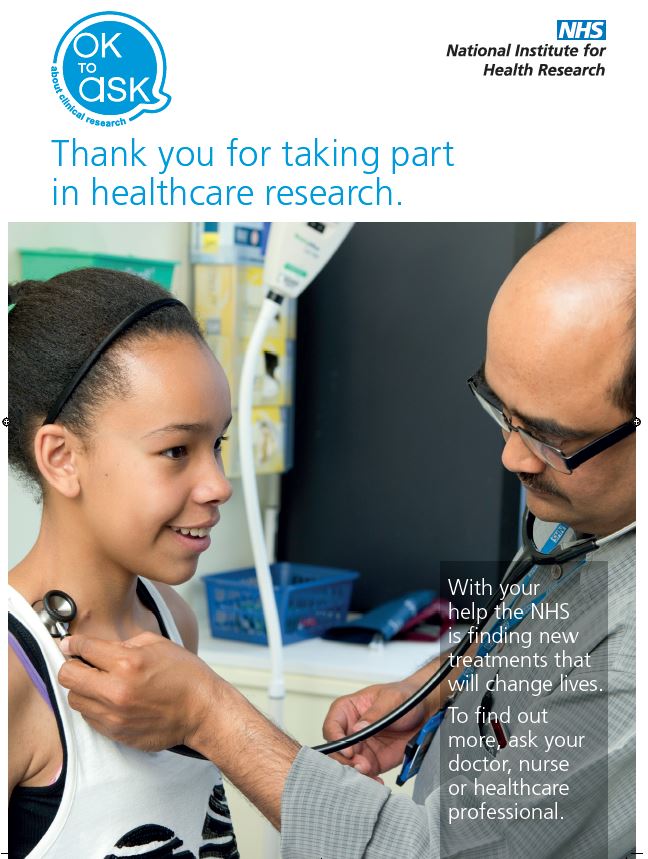