Have you ever heard of ‘the elevator pitch?’  It’s the notion that you should be able to summarise and sell an idea in the 30 seconds or less it takes to get to the top-floor in a lift.

I suppose the equivalent is the pitching of a film script to Hollywood producers.  For instance I just watched an in-flight movie called The Judge and my pitch for it would be ‘Bad-ass lawyer fights to save his estranged father, a distinguished judge, from going to prison for murder.’

A Canadian colleague recently told me the ultimate of ‘elevator pitches’ for clinical trials.  It was an actual advert in a lift imploring its users to sign up for a clinical trial!

Walking around Toronto in Canada there are a couple of blocks – a medical mile if you like – where many of the university research institutions and city hospitals are to be found.  Their buildings are emblazoned with posters and slogans, all of which are elevator pitches for medical research.  I took photos of some which you can see below.

Of course there are country-specific reasons why this may be so. Not least the role of private foundations and public donations in the health economy here in ways that are alien to those of us who have been brought up on the NHS.  But I would love to see the same boldness in the UK.

There are some great elevator pitches coming out of the wonderful #whywedoresearch grassroots campaign here in the UK which has really taken hold on social media.  Wouldn’t be great to see some of these made into banners hanging from our buildings?  Congratulations on the excellent Nursing Practice article by the way. 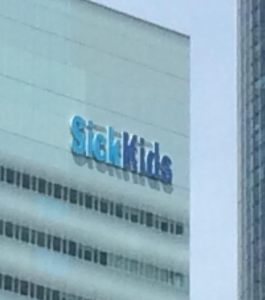